The theme was Manus x Machina: Fashion in an Age of Technology, which meant ‘sci-fi baddie’ to some (Taylor Swift) and ‘bohemian painters’ to others (the Olsen twins). 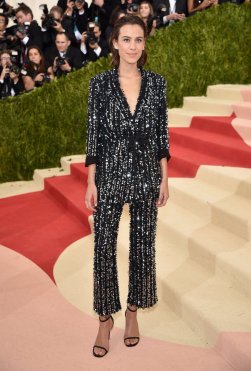 It’s no secret that we love Alexa on this desk. She’s smart, that’s the thing. She knows that at the Met, when you’ve got Beyoncé in latex and ZiGi doing sex-eyes on the red carpet, you can’t own the OMG bandwidth. Instead, she wears something cool, chic, original, like this Thakoon cropped trouser suit with a silk tie-belt. 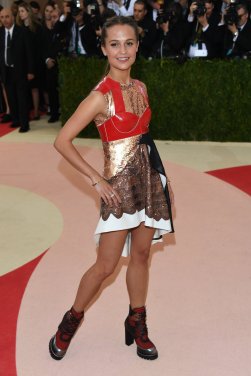 This is totally “Rey from Star Wars walks for Vuitton at Paris fashion week”, which come to think of it might be my favourite fashion look of all time. I love it. Weirdly, I chose look 34 from the Vuitton show, which features almost the same red leather harness, as what I hoped Taylor would wear. Vikander even pulls off the Lara Croft, Tomb Raider boots on the red carpet, which is amazing. 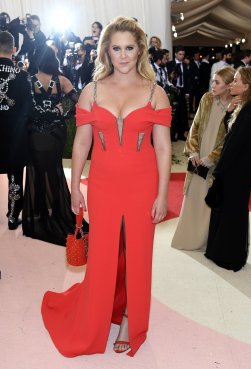 The cold-shoulder detailing on this Alexander Wang dress are a nice on-fashion touch, and the chain straps bring in the whole tech vibe, and the fishnetty cleavage works much better than you’d think. All good except for the handbag and shoes which are a bit matchy-matchy. It’s not a charity lunch in the burbs, Anna notices EVERY DETAIL. 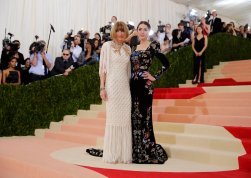 I love how balls-out regal this is from Anna. No harnesses, no scrappy bits, just a statuesque column of fringed cream Chanel, crowned with a gold laurel wreath, like the Queen of the universe. Bee is in Alexander McQueen, and seems to be whispering nuggets of courtly gossip in her ear, like the future’s Thomas Cromwell. 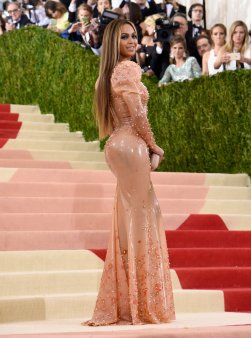 Beyoncé continues 2016 as heretofore, which is to slay all comers in her wake. She turned up on the Red Carpet minus Jay Z, which in wake of the whole album-outs-hubby-as-cheating-skank gate was never going to pass unnoticed. Her latex gown by Givenchy has puffed sleeves, which I have never seen in a latex gown before and which make the whole skintight-latex thing feel more haute and less rubber doll. Also noted: good hair. 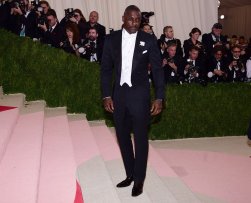 He is in super-formal Tom Ford white tie, complete with black tails and white waistcoat, accessorised with a white pocket square, the shiniest shoes every seen and a matt black Apple watch, a nod to his co-chair Jony Ive. Killing it. 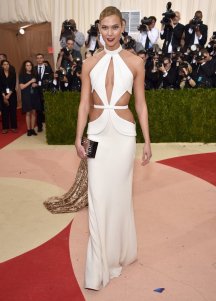 In the future, when midriffs rule the world, Karlie will be queen. Do not try this Brandon Maxwell dress at home. 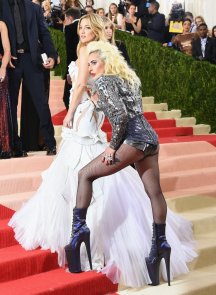 This photo of Lady Gaga feeling Kate Hudson’s bottom is quite weird. Not least because Hudson is the one wearing a dress, and Gaga is only in tights, and yet Gaga has shifted the spotlight onto the other bottom. WHAT DOES IT MEAN. Hudson’s dress is quite fun by the standards of Hudson, who is usually a pretty dull, just-make-me-look-hot dresser. Gaga looks a bit morning-after, like someone you’d see on a fire escape having a 5am cigarette break with the party still going on inside. 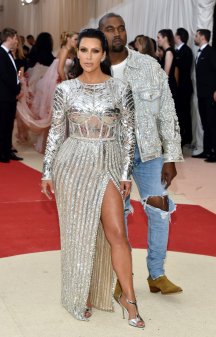 Gunmetal grey wasn’t bling enough for the Kardashian-Wests, so they went for straight-up silver. Balmain, obvs. Kim’s C3PO bodice is awesome, and the styling is on point: note the slicked back hair, and the spiky ear cuffs. Kanye’s silver jacket and ripped jeans, on the other hand – really, Kanye? You think? Because you look like a country singer topping the bill at Vegas. 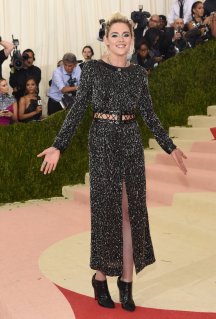 Who wants to play a game of, Guess The Post-Met-Red-Carpet Fashion Think Piece? Oh come on! It’ll be fun! Because I think it’s all about why a ‘tech white tie’ dress code is interpreted as ‘gunmetal grey’. (See also: Lara Stone, Karlie Kloss, Brie Larson.) My first guess is: one part Jane Fonda as Barbarella, one part Mark Zuckerberg in grey marl T-shirts. 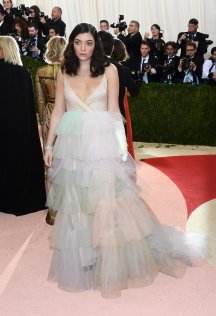 Your arm, love! What happened? Do we know? Or is it an arm-pact with Zayn? Is it code for a forthcoming stiff-arm based collaboration? Whatever, Lorde is brilliantly Lorde here. She looks like a grumpy teenage bridesmaid, who is totally furious with her mom for making her wear a stupid dress. Note the totally checked-out facial expression. 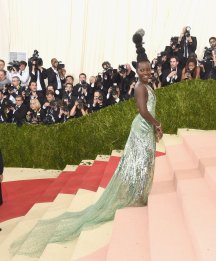 The only thing more amazing than this hairstyle – a gravity-defying, segmented-ponytail – is that Lupita Nyong’o still looks ridiculously elegant, in a ‘do that would be stone cold Dr. Seuss on a mere human. Also love the Calvin Klein dress, which is simple (the hair does the heavy lifting here, quite literally) and a gorgeous, unexpected colour. 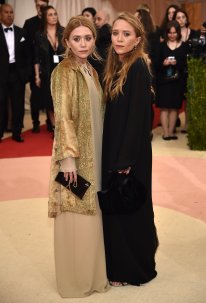 No one can accuse the Olsen twins of blindly following the crowd, I’ll say that for them. Mary-Kate and Ashley are 29, but they have come to the Met dressed as late-middle-aged bohemian painters, drifting around their vast shabby-chic Primrose Hill villa in clothes they bought in The Cross and Voyage in the 1990s. 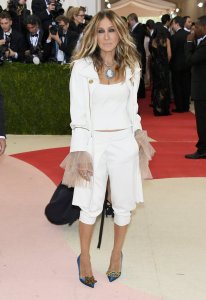 You know in Cinderella, where the fairy godmother turns four lizards into footmen for the pumpkin-slash-coach? Am I right or am I right? I mean, look at the cute little footman-shoes! And the cameo necklace! Seriously, though, most partygoers interpreted ‘tech white tie’ as being in some way futuristic. Not Sarah Jessica Parker! No, she saw it as white knickerbockers and a frock coat. See what she did there? No, me neither. The organza cuffs look a tiny bit like she had a runny nose and put kitchen roll up her sleeves just in case. 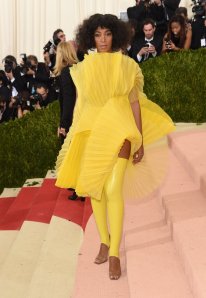 Post lift-gate, where she famously let fly at Jay Z, Solange’s role in the fashion-celebrity soap opera that is the Met Gala will always as Beyoncé’s kick-ass wingman. Turning up in bright lemonade yellow, to match not only the title of Lemonade but Beyoncé’s dress in the best-known scenes, is a clear Wingman move. Also, she echoed Bey’s latex theme in the leggings. 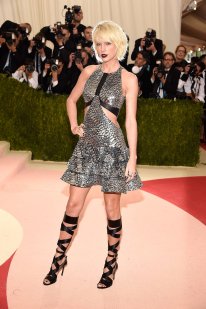 Do you know what? I was honestly on board with the whole platinum-blonde, edgier, Taylor Swift 2.0 up until this point, but this is where I lose faith with it. Taylor Swift as an old-school sci fi baddie is entirely unconvincing. I am not into a silver rare skirt, even a Vuitton one. Taylor: this is not your future. Haters gonna hate. 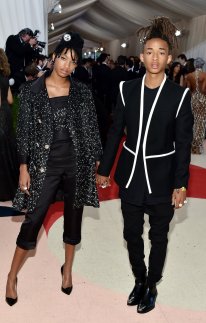 I love these two so much. They ARE the future. Everyone else looks like their stylist forced them into something metallic and angular when they were pining for a nice pastel gown, but not these two. Willow is like, I’m just gonna some black cropped trousers and a coat, I guess it might be Chanel, whatever. Winning. 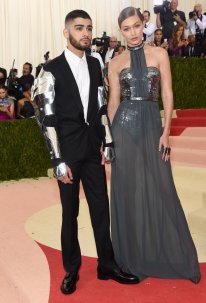 These two made their first joint public appearance in Zayn’s Pillowtalk video and their second shot by Mario Testino in American Vogue. Their partnership is the kind of pure visual perfection photoshop can’t buy. For their first IRL appearance a deux, Zayn wore Versace with arm-our, which might be a nod to Robocop or might well turn out to be a plug for his next single (wouldn’t put it past him). Gigi is in Tommy Hilfiger, and looks like a beautiful android-mermaid.